With the rapid development of cryo-EM technology in the field of membrane protein structure, it is now possible to study multi-state complicated protein complexes. Xu Fei 's team at iHuman Institute of ShanghaiTech University reported the three-dimensional structures of APJ receptor, an important drug target for cardiovascular diseases. Remarkably, the structures revealed APJ forming active complexes with downstream G proteins at stoichiometric ratios of 2:1 and 1:1, respectively, and uncovered multiple mechanisms which APJ is regulated by endogenous peptides or small molecule agonists. G protein-coupled receptor (GPCR) is currently the largest membrane protein superfamily of drug targets and plays an important role in cellular signal transduction. The structures in this study have provided the first solid evidence about a class-A GPCR protein transduces signaling as a dimer. The results were published online on July 21, 2022 in journal Nature Structural & Molecular Biology under the title Structural Insight into Apelin Receptor-G Protein Stoichiometry.

APJ receptor is closely associated with heart development, cardiovascular homeostasis and cardiac contraction, and is one of the most promising targets for cardiovascular drugs; Activation of APJ receptor signaling pathway can relieve or treat multiple types of cardiovascular diseases such as heart failure and hypertension. A number of internationally renowned pharmaceutical companies such as Amgen, Sanofi, BMS and some biotechnology companies have developed effective APJ agonist ligands, but no drug has yet successfully come into the market. In order to support the development of novel APJ agonist drugs, especially small molecule drugs, four key scientific questions need to be addressed: 1) How APJ receptors are activated by ligands and what are their activation mechanisms; 2) What are the molecular mechanisms of small molecule ligand recognition; 3) What are the mechanisms of action of the two types of endogenous peptide ligands; and 4) What are the structural basis for the regulation of signaling pathways, especially receptor dimerization? Can new insights be brought to drug design?

Endogenous ligands of APJ include two classes of peptides, Apelin and Elabela, which play different roles in cardiac development and cardiovascular regulation. Elabela is a newly discovered endogenous peptide ligand; The lack of Elabela in the mother’s body during fetal development can lead to developing fetal preeclampsia and cardiovascular malformations. Previously, Xu 's team has successfully reported the complex structure of the APJ receptor with Apelin analogues (Ma et al, Structure, 2017), revealing a two-site ligand binding mode. However, how APJ recognizes endogenous ligands of the Elabela and the mechanism of small molecule ligands remain to be elucidated, and the mechanism of receptor activation is still unclear, limiting novel ligand drug discovery targeting APJ. On the other hand, novel regulatory mechanisms of class A GPCRs such as dimerization have long been a focus of debate in the field, and despite the support of a series of functional experiments, molecular mechanisms and the relationship between dimerization and receptor signal transduction cannot be clarified due to the lack of precise dimer structure. 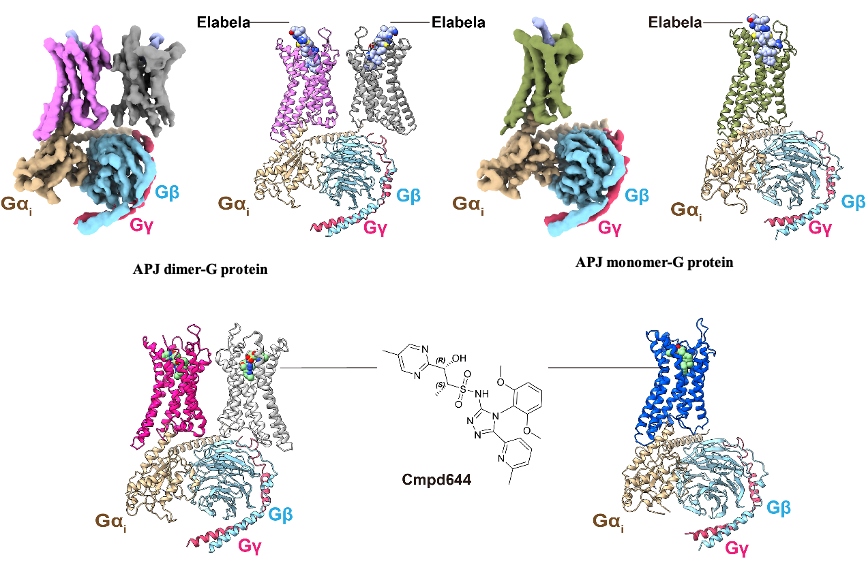 With years of exploration, with the support of the Bio-EM facility at ShanghaiTech University and by means of cryo-EM technology, the research team not only revealed the binding mode of the endogenous ligand Elabela and the high-affinity small molecule compound cmpd644, but also obtained the structure in the activated state of the APJ receptor for the first time (Figure 1).

Intriguingly, the research team obtained two complex structures in which APJ dimers and monomers bound to downstream G proteins when performing cryo-EM two-dimensional classification study. The structures showed that both APJ dimers and monomers are bound to only one G protein (Fig. 1). In addition, it was found in this study that the dimer of APJ (class-A GPCR) was connected through a very small hydrophobic interface compared to the dimer of class-C GPCR (Figure 2), and this limited interaction interface was associated with the monomer-dimer flexible plasticity, which suggests that the formation of class-A GPCR dimers doesn’t need extensive interactions, which may be related with its versatile pharmacological regulation, and this interface also provides an initial framework for other class-A GPCR dimerization studies. These findings reveal a new regulatory mechanism of GPCRs acting through dimers and monomers, which will provide new insight for subsequent studies of GPCR homo- and hetero- dimerization, offer the structural basis to the recognition mechanism of dual endogenous ligands of APJ, and also provide accurate templates and new mechanisms of action for structure-based drug development for the treatment of cardiovascular diseases.