G protein-coupled receptors (GPCRs) play a crucial role in transducing signals from extracellular ligands to intracellular effectors, and thus regulate numerous physiological processes. Roughly 40 percent of drugs on the market act on GPCRs, making it one of the most prominent drug target families. Despite of breakthroughs in recent GPCR structural and pharmacological studies, more than 100 GPCRs remain "orphan receptors" whose ligands and signaling pathways have not yet been elucidated.

On April 13rd, in the leading scientific journal Nature, research groups led by Wu Beili and Zhao Qiang from the Shanghai Institute of Materia Medica of the Chinese Academy of Sciences, in collaboration with Shui Wenqing's team at ShanghaiTech University, reported four cryo-electron microscopy (cryo-EM) structures of two adhesion receptors, ADGRD1 and ADGRF1, in complex with G protein, together with extensive functional data.

Adhesion GPCR (aGPCR) family, which comprises 33 receptors, mediates a variety of physiological processes such as immune responses, organ development and cellular communication. These receptors are involved in many diseases, including schizophrenia and cancers. However, the aGPCR family is by far the least understood class of GPCRs, and the majority of its family members are orphan receptors which pose great challenges to drug discovery. ADGRD1 and ADGRF1 have both been recognized as oncogenes in multiple types of cancers, but their activation and modulation mechanisms remain elusive. In this study, researchers made exciting progress by solving the complex structures of ADGRD1 and ADGRF1 bound to G proteins. These structures revealed many unique features of receptor signal transduction and functional modulation.

Another important finding of this study is a natural lipid molecule specifically associated with ADGRF1 and modulating receptor function. By performing lipidomic analysis, Shui group identified this endogenous ligand as lysophosphatidylcholine (LPC). Functional assays indicated that the LPC molecule facilitates receptor activation by stabilizing the receptor in an active state. This is the first time to discover an LPC ligand being associated with a GPCR and acting as an allosteric modulator.

Through uncovering key molecular basis for the intrinsic activation of adhesion receptors, this study has provided new insights into the signal transduction mechanism of the aGPCR family as well as new templates for structure-based drug design. 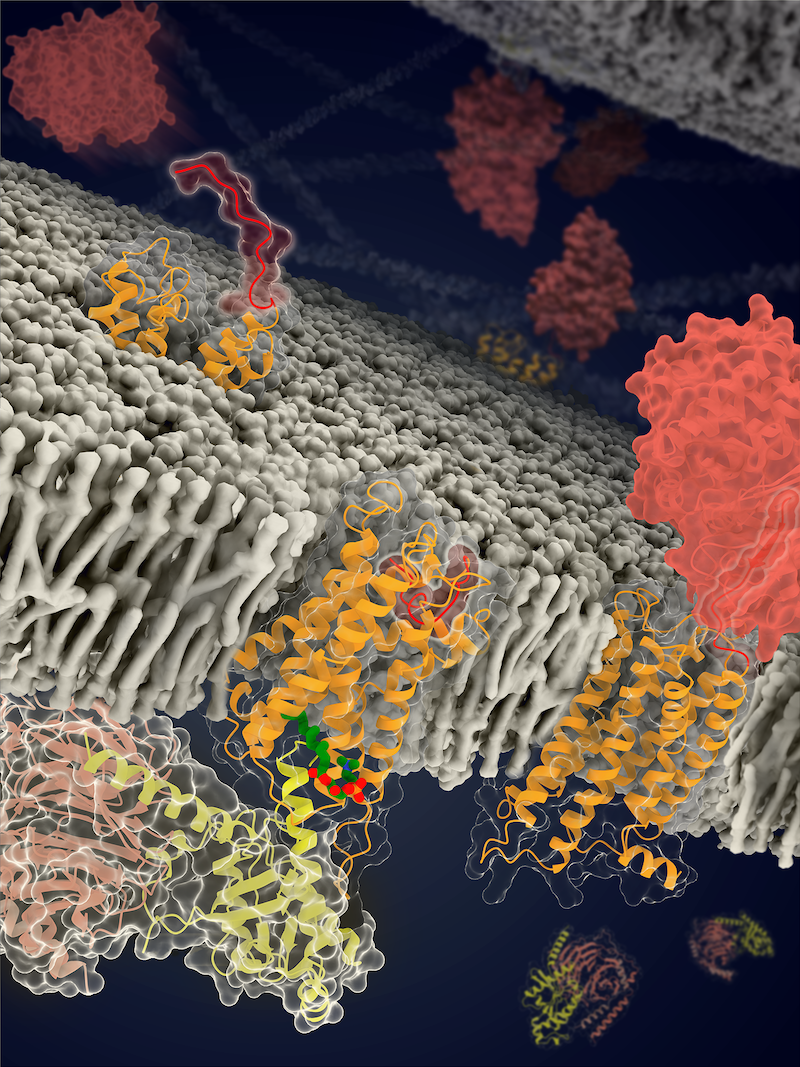 (The stalk, TMD and GAIN domain of the receptor are colored red, orange and dark red, respectively. LPC is colored green and three subunits of the G protein are colored yellow, light pink and light grey, respectively.)