According to the 2019 World Health Organization report, over 350 million people worldwide live with depression, with an annual increase rate of ~18%. In China, depression affects over 95 million people. About 2/3 of those with depression had suicidal ideation, and 25% attempted suicide. However, most existing antidepressants are slow-acting, short-enduring and have low response rates. Therefore, there is a great medical need for novel antidepressant medications.

Over the past ten years, there is a growing belief among many that psychedelic pharmacology may represent a new era in psychiatric therapeutics. Most clinical studies described over the past decade have focused on psilocybin. This naturally occurring prodrug compound originally found in the Psilocybe genus of mushrooms were used for healing and spiritual purposes by the Mayan and Aztec cultures of Mesoamerica. The US Food and Drug Administration granted psilocybin the ‘breakthrough therapy’ status for the treatment of major depressive disorder and drug-resistant depression in 2019. A phase II clinical trial proved the ability of psilocybin to improve the symptoms of patients with depression within one day after the dosing, and to sustain the effects for more than three months. However, the hallucinogenic effects of these drugs remain a significant concern, and scientists have been suspecting whether the hallucination is therapeutically necessary or simply a side effect. 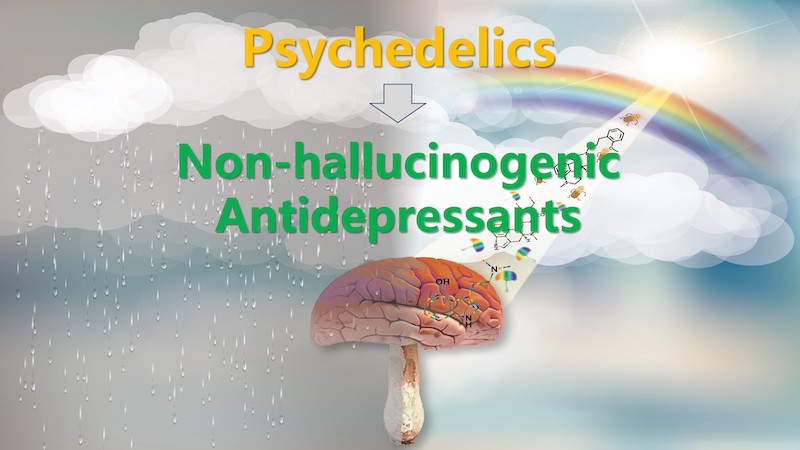 Psilocybin is converted in the liver to the pharmacologically active psilocin, which then acts on the serotonin 2A receptors (5-HT2AR) in the brain. The research team first solved the crystal structure of 5-HT2AR complexed with psilocin. They found that psilocin displayed the second binding mode (known as the extended binding pocket, EBP), which is regulated by lipids. Interestingly, compounds occupying EBP more than OBP (orthosteric binding pocket, the classical binding mode) exhibited anti-depressive activities in animal models without triggering hallucination. Inspired by the structural insights, they designed several psychedelic analogues which would favor EBP over OBP binding. Remarkably, two designed analogues (IHCH-7079 and IHCH-7806) displayed antidepressant-like activity in mice but without hallucinogenic effects.

These findings provide a solid foundation for the structure-based design of safe and effective non-hallucinogenic, rapid-acting antidepressants. Further preclinical and clinical studies are required to verify their safety and antidepressant effects in humans.