Recently, scientists from Xu Fei's lab at iHuman Institute, ShanghaiTech University with their collaborators made a new breakthrough in the field of human cell signaling research. They successfully resolved the 3D protein structures of the first human orphan GPR52 receptor and presented a full structural landscape covering the receptor’s different functional states: ligand-free state, ligand-bound state, and in a downstream signal transduction molecule coupled—the G protein-bound state. Together, these high-resolution structures revealed the structural basis of ligand recognition for the orphan receptor and more interestingly a self-activation phenomenon that was not observed before. On February 20th Beijing time, this work was published online in the prestigious academic journal Nature with the title of Structural basis of ligand recognition and self-activation of orphan GPR52. This has been the second high-level scientific research result published on the international top journal by the iHuman Institute since the beginning of this year. Prof. Xu Fei is the leading PI of this work, whose team published another Nature paper in August of 2018.

G protein coupled receptors (GPCRs) constitute the largest membrane protein family located on the cell surface. These proteins just behave like signal transducers responsible for relaying signal and message communication from outside of the world into our cells, and are thus widely involved in the regulation of various physiological and pathological processes in human body. For example, you may need a cup of coffee when you are feeling sleepy, while the caffeine in your coffee are indeed the signal molecules that act on a classical GPCR called the caffeine receptor, a type of adenosine receptor distributed mainly in the brain and other tissues. Here, the caffeine molecule is known as the “ligand” that finds its receptor in the cells and trigger the signal transduction process. Another example is morphine, the most widely used analgesic drug in clinic, whose receptors—the opioid receptors are the oldest drug targets in the GPCR family. GPCRs are often named after their endogenous ligands, for example, the receptors recognizing adrenaline are called adrenergic receptors and the ones bound to dopamine molecules are called dopamine receptors. Playing such an important role in human cell signaling and widely distributed on the cell surface, GPCRs malfunctioning are linked to a variety of human diseases, such as inflammation, metabolic disorders, neurodegeneration, cancer and so on. As a result, GPCRs have long been sought as major drug targets. Indeed, more than 30% of modern drugs are targeting on GPCRs.

GPCRs are integral membrane proteins with seven membrane-spanning helices and are thus also called seven transmembrane receptors (7TM receptors). In the human genome, there are more than 800 GPCR members. Till recently, 3D structures for more than 60 unique GPCRs have been reported, which strongly promoted the field of structure-based rational drug design and development. None of these structures are for the orphan GPCRs, so named because of their unknown endogenous ligands—the native signaling molecules acting on these receptors are yet to be identified, though they are composed of over 100 members in the GPCR family.  GPR52 belongs to class-A orphan GPCRs with sequence identity to non-orphan GPCRs lower than 20%. Such a low homology hinders the structural investigation of this receptor using the established experimental methods applied to classical GPCRs. GPR52 is mainly expressed in the brain and plays an important physiological role. Its agonists, which increase the activity of the receptor and its signaling pathway, are identified as potential drugs for schizophrenia, cognitive impairment, psychiatric disorders, brain malformation and hyperactivity. In addition, recent studies have found that GPR52 antagonists or inverse agonists (that is, inhibition or reduction of the receptor activity) could be candidates for treatment of Huntington’s diseases as GPR52 is closely associated with abnormal expression of Huntington’s protein in patients.

“There have been numerous reports on the GPCR structures in recent years, but the standing of the structure of orphan GPCRs is still blank,” said Lin Xi, Ph.D. student from Xu's lab and the co-first author of this paper. “Therefore, I chose an orphan receptor as my thesis study with the hope of making some breakthroughs in this challenging field.” Given that there are more than 100 orphan GPCRs constituting a large reservoir of emerging drug targets, structural understanding of these targets is highly demanded to explore the new direction of GPCR research. The development of tool ligands and probes based on the structural information could also facilitate the exploration of the function of orphan receptors and their relation to diseases. More importantly, structural-functional understanding of orphan receptors will lay the foundation and direction toward the finding of native ligand molecules, the process so-called deorphanization. These will provide important insights for drug discovery and disease treatment. “Given the important role of GPR52 as a representative orphan GPCR, I am confident that my research will contribute to the understanding of other orphan receptors and promote the discovery of new drugs,” said Lin Xi.

The main difficulties and challenges of this work lie in the fact that nearly all previously published GPCR structures have a bound ligand molecule to stabilize the receptor, facilitating the protein to crystalize. On the other hand, known GPCR structures with high homology are usually used as reference for the experimental design of studying new GPCRs. The orphan GPR52 receptor in this study, however, had only a handful of tool ligands available, all of which are agonists (further increasing the activity of the receptor). Furthermore, its homology to known GPCR structures is too low to make it possible of reference-based construct designing. Therefore, it turned to be very difficult to obtain stable proteins and high-quality crystals for GPR52. On average 200 to 300 gene constructs were screened to successfully resolve a GPCR structure, while for GPR52 nearly 600 constructs were carefully screened. “To this end, we spent about four years until a stable protein construct and purification protocol were identified,” said Prof. Xu. “Finally we were able to stabilize the GPR52 protein in a ligand-free state amenable for crystallization and structural determination by x-ray crystallography.” This structure revealed a striking feature that the extracellular loop 2 (ECL2) domain of GPR52 folds into the transmembrane core and occupies almost the entire orthosteric ligand-binding pocket. This feature just resembles a real ligand leading to a hypothesis that the ECL2 motif may behave as a built-in agonist. The researchers then assembled the GPR52 receptor with heterotrimeric G proteins, the downstream signaling partner, in the absence of an agonist. “This is really amazing,” said Prof. Xu, “as previously all the GPCR-G protein complex structures required an external agonist to stabilize the entire structure.” By collaborating with Prof. Lei Ming’s group at Shanghai Jiao Tong University, the team solved the GPR52-G protein complex structures using the state-of-the-art cryo-electron microscopy. This structure uncovered a “self-activated” GPCR and its association with downstream G proteins. It is called “self-activating” state because such a functional state of the receptor is not stimulated by an external agonist molecule, but solely depends on its own special mechanism—the built-in agonist motif of ECL2. Till now, the story is nearly complete, but the researchers continued to ask: if the orthosteric pocket is occupied by the receptor’s own motif, where will be the real ligand bound? This question is also closely related to the clue of deorphanization—that is, to uncover the binding mode of the endogenous ligand. The research went ahead to co-crystallize the GPR52 with an activating tool ligand c17 and quickly solved the c17-bound structure. In this structure, the ligand c17 bound to an “side pocket”, a narrow position toward one side of the receptor. Such a side pocket is distinguishable from either the orthosteric pocket or other allosteric sites previously reported for GPCR allosteric modulators. This property can be further exploited for rational drug design to improve the selectively and specificity targeting on GPR52.

Prof. Liu Zhijie, Executive Director of iHuman Institute commented, “This is absolutely a remarkable achievement, another influential research result in this highly competitive field. It again shows the productivity of our research facility and platforms at the university.” 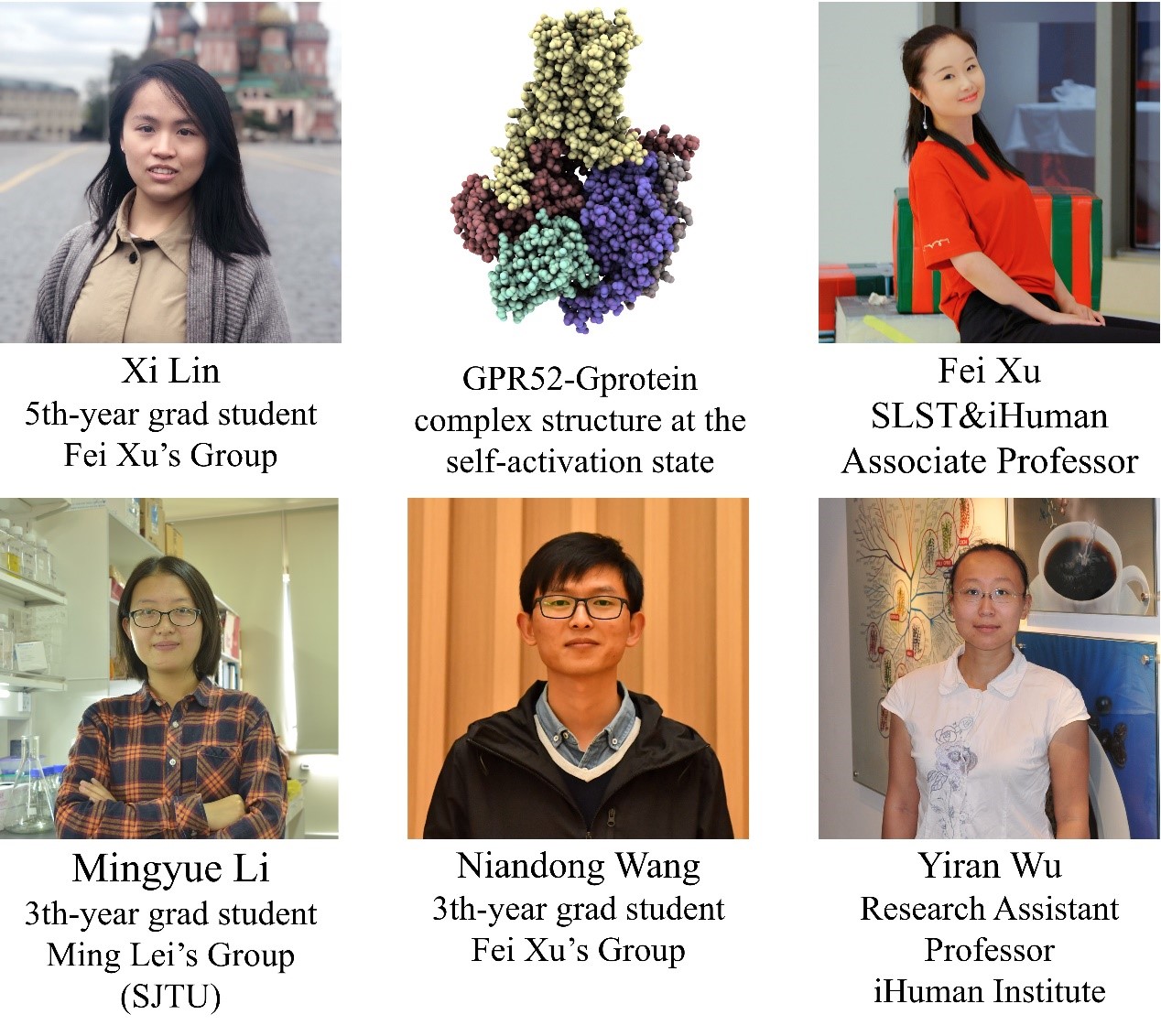