A team of scientists led by Professors Liu Zhi-Jie and Hua Tian at the iHuman Institute of ShanghaiTech University has determined and analyzed the high-resolution atomic structures of human cannabinoid receptors, also known as the “marijuana receptors”, 1 and 2 (CB1 and CB2) complexed with their agonists and downstream signaling G proteins. The results, described in a paper entitled Activation and Signaling Mechanism Revealed by Cannabinoid Receptor-Gi Complex Structures, was published online on January 31th, 2020 in the top international academic journal Cell.

G protein-coupled receptors (GPCRs) are the largest and most important protein family in the cell membrane of the human body and play very important roles in the cell signal transduction. About 40% of drugs on the market target GPCRs. The agonists will activate the receptor, while the antagonists will inhibit the activation of the receptor. Both agonists and antagonists show potential medication for drug discovery. CB1 is one of the most highly expressed GPCRs in the human central nerve system and is the target of one of the longest used herbs, marijuana. CB2 is mostly expressed in immune cells, such as macrophages, B cells, “natural killer” (NK) cells, monocytes, neutrophils and T cells. Their ligands, including agonists and antagonists, can be used for treatment of pain, mode, neurodegenerative disease, obesity, liver fibrosis, inflammation and immune diseases. Since 2016, iHuman team has solved the 3D structures of CB1 in complex with antagonist which was published in Cell (Oct. of 2016), CB1 in complex with agonist in Nature (Jul. of 2017), CB2 in complex with antagonist in Cell (Jan. of 2019), separately. The previous work revealed the structural features of the antagonist- and agonist-bound CB1, antagonist-bound CB2, yet does not inform us as to how the agonists bind to CB2, especially how the marijuana receptors bind with G proteinsand elicit their downstream signaling which lead to diverse physiological effects.

In order to decipher the diverse agonism of CB1 and CB2, including how the two receptors obtain their selectivity towards different agonists, iHuman team collaborated with Alexandros Makriyannis lab from Northeastern University, designed and synthesized new agonist, AM12033, for CB2 and solved its complex crystal structure with CB2.  Using the Bio-EM facilities of ShanghaiTech, the team determined single-particle cryo-EM structures of CB1-AM841-Gi-scFv16 and CB2-AM12033-Gi-scFv16 at resolution of 3.0 ANG and 2.9 ANG, respectively.

“Through close cooperation andefforts of our team, we disclosed the mysterious features of both receptors at inactive, intermediate and activated signaling states. It is another huge step for us in understanding the human cannabinoid system”, said Dr. Hua Tian. This study also revealed the different activation mechanisms of CB1 and CB2, even though the binding modes between receptors and Gi proteins are similar. In addition, the researchers discovered the allosteric modulation role of cholesterol on CB1, which provides new clues for more specific drug design targeting CB1. At the same time, agonist selectivity towards CB2 is uncovered, which will help precision immune drug discovery for CB2.

“Structural biology studies on GPCR-G protein complexes have been challenging due to their conformational flexibility and complex instability. Thanks to the great effort of Drs. Hua, Li, Wu and other team members, I’m thrilled to see the breakthroughs in deciphering the 3D structures of both receptors’ signaling complexes. The results will pave solid theoretic and experimental foundation for our subsequent new drug development endeavor. It will also realize iHuman’s vision of ‘Progressing on both basic research and translation applications’ one step further” said Liu Zhi-Jie, Executive Director of the iHuman Institute and Professor of School of Life Science and Technology,the lead corresponding author of this paper.

Other co-authors of this paper are from Prof. Zhao Suwen’s lab of iHuman Institute, Prof. Yuan Shuguang’s lab from Shenzhen Institutes of Advanced Technology, Chinese Academy of Sciences and Prof. Laura Bohn’s lab from Scripps Research. The cryo-EM single particle data were collected at the Bio-EM Facility of ShanghaiTech and crystal diffraction data were collected at the 41XU beamline of Spring-8 Synchrotron Facility of Japan. The Cell expression, Cloning, Protein purification and Functional assay Cores of iHuman Institute provided technique support. This work was finally supported by the National Nature Science Foundation of China, the Ministry of Science and Technology of China, Shanghai Municipal Government and ShanghaiTech University. 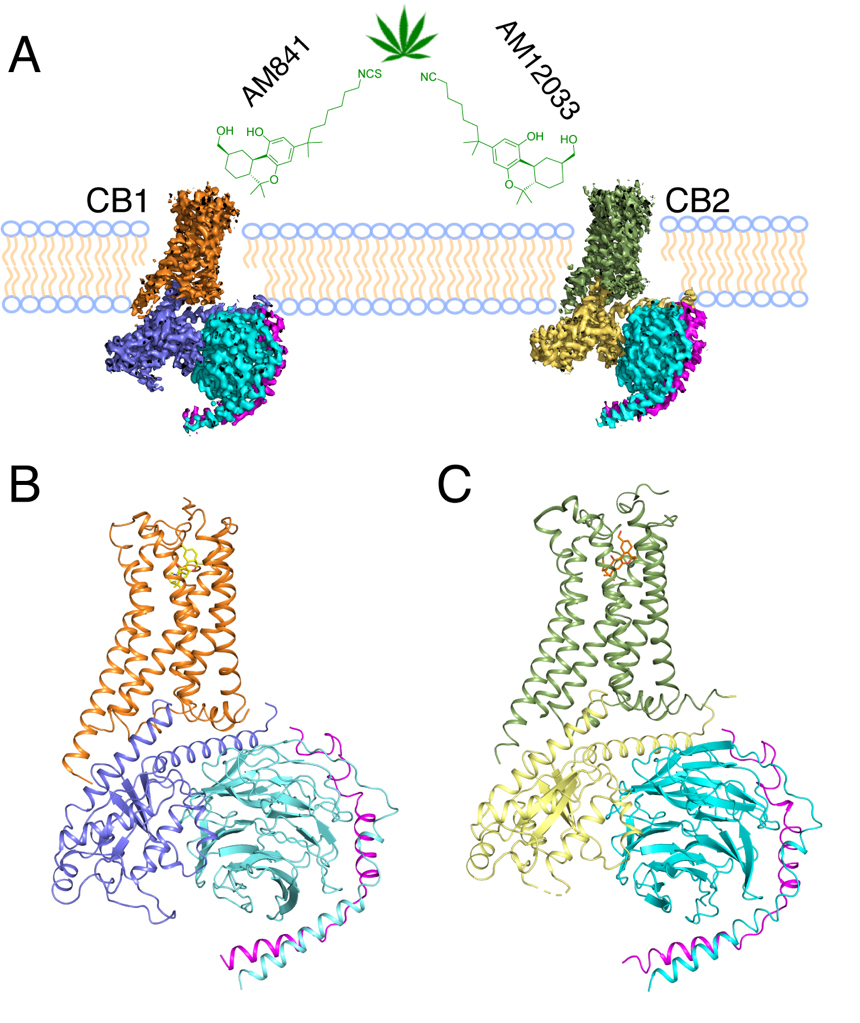 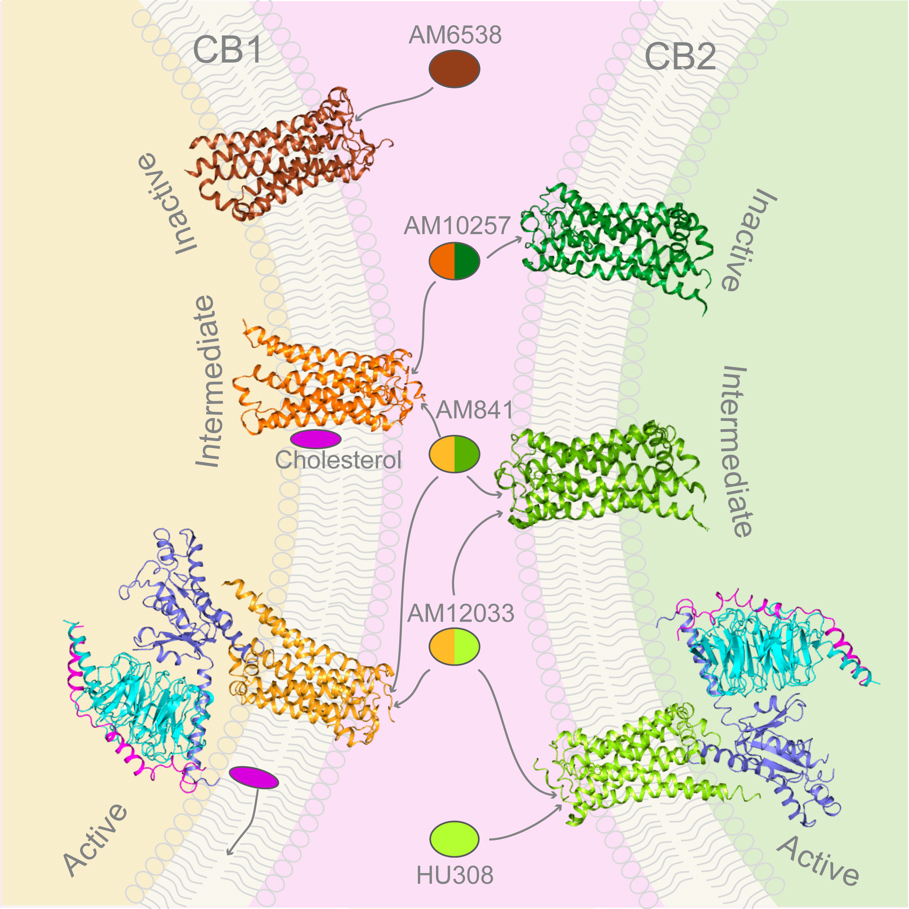 Figure 2. The structures of inactive, intermediate and activated signaling states of CB1 and CB2 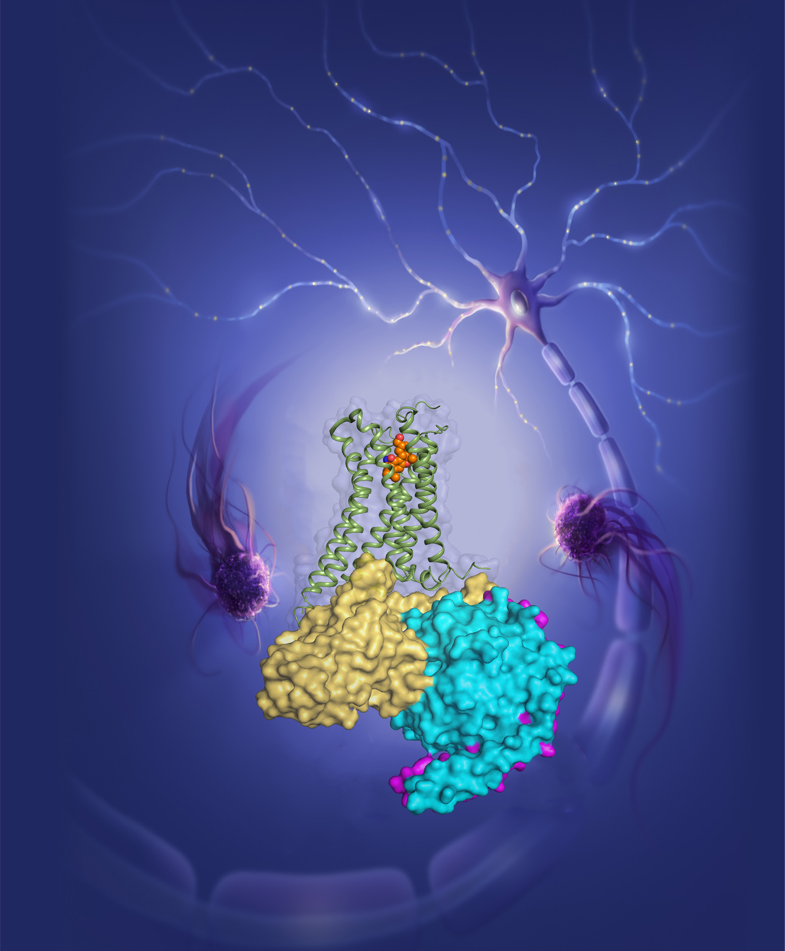